Love Your Enemy- Bless Those Who Curse You

These is a drawing of a painting we have hanging in our living room.  In 1569 Dirk Willems had escaped jail and was being chased by a theif cathcher. Dirk had ran across a frozen pond and was safe but the theif chaser fell through the ice. Dirk could have escaped but he ran back to rescue this man. Unfortunately Dirk was arrested and was burned at the stake. 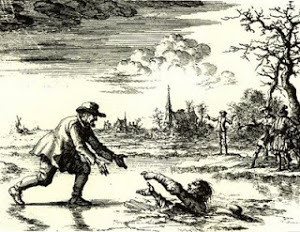 I had no idea I haven't posted in a month! We had the flu recently which was pretty bad. That stuff is just nasty! You feel like you are coughing up your lung, and you feel like you could fry an egg on your forehead because the fever is so high!

Well enough about that. I have this tape from The Overholt Family called Anabaptists-Martyr Hymns. These hymns were written by Anabaptists who were either in prison or in prison waiting to be put to death. These hymns can be found in a special section in The Christian Hymnary dedicated to these faithful martyrs. Their stories can also be find in The Martyrs Mirror. People like Michael Sattler, Georg Wagner and Felix Manz just to name a few.  The hymns reflect their willingness to die for the faith. Many of these sang on the way to their place of execution.

When I read Martyrs Mirror I can't help but feel like those responsible for putting these Christians to death must somehow become desensitized to human suffering. The early Christians died terrible deaths such as burning at the stake, crucifixion, buried alive or even put in an arena and and hungry lions were brought to kill the prisoners.

And even today Christians in foreign countries are in jail and possiblly waiting death for their faith in Jesus Christ. Would we being willing to die for our faith? Honestly, would we?