A few days ago Stephanie at TheEnchantingRose posted a delicious recipe for bread pudding. It goes great with afternoon tea!
The recipe didn't call for raisins but I topped mine with some raisins I had on hand. Also I used hamburger and hot dog buns. I had never made bread pudding before. I couldn't believe how easy it was and that I actually liked it! 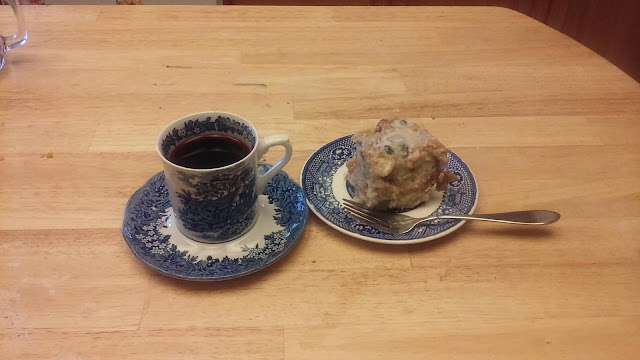 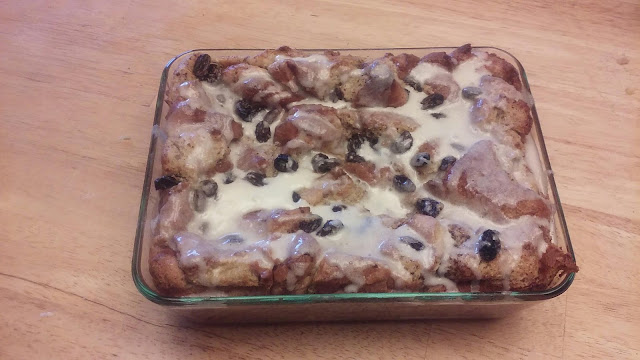 I did this tray in honor of Afternoon Tea Week in the UK which started yesterday and runs through the 20th. There's a bunch of us bloggers  and non bloggers who aren't in the UK joining our fellow tea lovers in Afternoon Tea this week.
at August 15, 2017

I wanted to get a tea tray but nice ones are too expensive. I decided to do my own using all Dollar Tree items. All I did was get a 13 x 9 sheet pan and some stickers. In this case I used wall stickers because they were the prettiest. My daughter got some paints and Modge Podge, again Dollar Tree.
Basically all we did was painted the tray, let it dry and put the stickers on. We painted a couple of layers od Modge Podge, letting dry between layers. Easy Peasy! 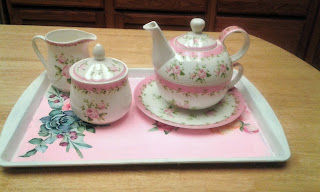 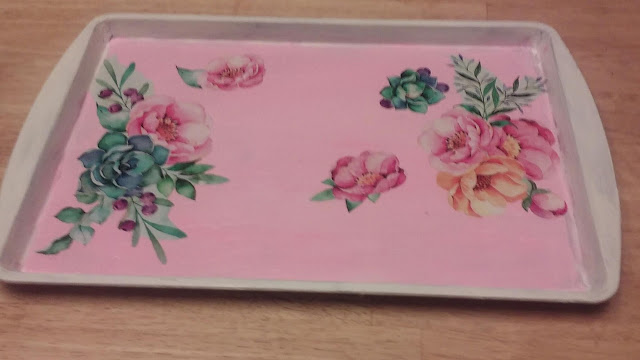 We are having a thunderstorm and I wanted to see the radar. It gave me the giggles because it looks like a bird. 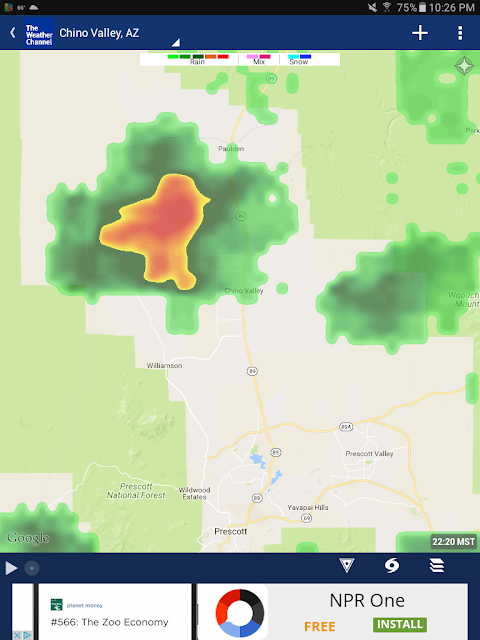 As I'm sitting here reflecting on memories of Dodie I remembered that a year ago today, we crossed the Colorado River out of California to start our new lives in AZ. We didn't have a home. We didn't have much money because the funds from probate hadn't been released. We spent two weeks cramped in a nice but not very large hotel room. We didn't eat the most nutritious meals, which consisted of microwaved foods from nearby Dollar Tree or the market. We occassionally had a pizza delivered. But we also ate out alot during that two week hotel stay. After two weeks of hotel living, our real estate agent and his wife (who are now our friends!)offered their RV for us to stay in while he helped us find a home.
Sometimes I find it hard to believe that we left CA totally on faith and trusting  that God would 1. Show us the house we are to buy and 2. Provide the money to buy our house.
In September we will have been in our house a year. We are so blessed to have been led here.
at August 12, 2017

Here's a more upbeat post. I made 7 quarts of pickles a couple of days ago. I made 7 quarts but my youngest wanted pickles so we stuck that jar in the fridge so that's why only six are shown.
This was my first time making pickles and I had so much fun, I want to do it again! 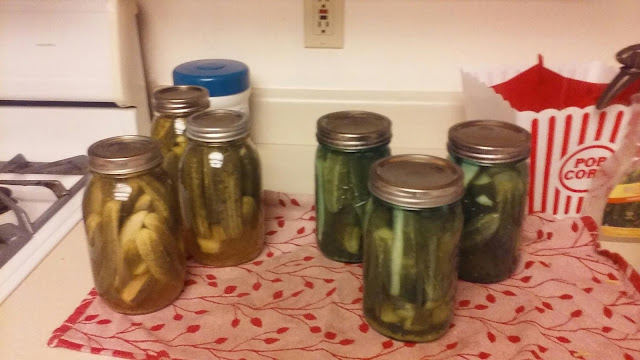 We ended up putting our kitten Dodie down yesterday. It was one of the hardest things we had to do. She was not eating as well as she should, she started to stagger when she walked and we think she was losing her sight. The FIP disease was just too hard for her to fight.6
I think some of her habits such as putting her toy in the water, jumping on the couch with her wet toy, and talking to me while I made the morning coffee (things she stopped doing when she got sick) were possibly her way of saying goodbye and to remember the good times. We also believe the Lord knew this was going to happen and He needed someone to care for His furry creation because her time was limited. Dodie actually chose us at the shelter. She climbed on my husband Tim's lap and made herself comfortable. Her sister Kirstie did the same for my daughter. We knew we couldn't separate those two.

We are sad for ourselves but we are even sadder for littermate sister Kirstie.  She sensed something was wrong with Dodie because she was always grooming her and she was gentle (sometimes!) when she wanted Dodie to play with her but Dodie was just too sick to play.

Yesterday Kirstie watched us carry Dodie in her crate and she became very alarmed when we arrived back from the vet upset and empty handed.  She has been looking for her and the poor thing thing didn't even want to come out of my youngest daughter's room to eat this morning but stayed hid. The kitties usually sleep in my laundry room but we didn't have the heart to put her in there alone. She finally came out but she is very subdued. She keeps looking for Dodie hoping to see her.

We are not sure how to help  Kirstie other than to just love on her and give her lots of attention. She is still a kitten herself so losing Dodie for me makes all the more sad because she was only nine months old.

It's easy to think, oh it's just a kitten and we need to just " get over it" but it is just not that easy since we have never gone through this as a family before.
Not to mention Dodie was perfectly created for us and it was our pleasure to have her for such a short time.
at August 12, 2017

One of my favorite things is to have tea. I love my afternoon tea and  there's nothing like a nice cup of tea before bed. But I also love my time with the Lord. I have my usual time with Him in my "War Room" that consists of devotional reading from Beside the Still Waters, scripture reading, singing hymns and prayer. Then there's the extra I get to spend with God. Those middle of the day times when God puts someone on my heart to pray for or if I'm needing a boost of encouragement.
I hope you too have your own "tea with God."
This is my absolute favorite tea for one! 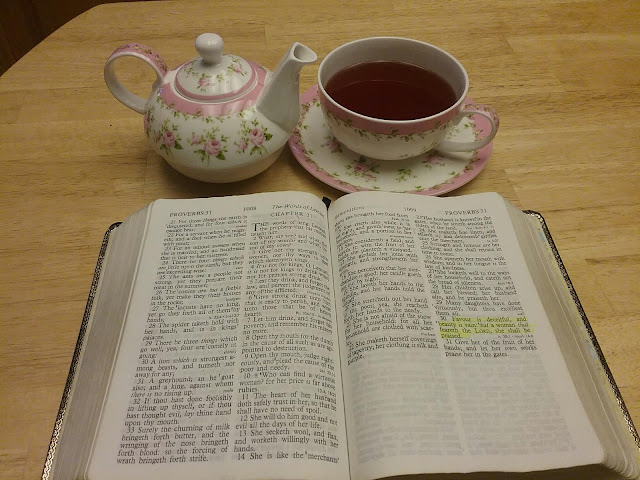 This is one of our precious kittens Dodie. She is such a sweet little thing but we will have to say goodbye to her though we don't know when. She has a deadly disease called FIP. FIP stands for Feline Infectious  Peritonitis.  I haven't wanted to post about it but I think writing about it may help.

There is no cure so for now we are giving her Predinsone to help give her a appetite and give at least a better quality of life. She has mostly good days. She will meow and beg for treats which is her favorite thing to do. She takes her toy and puts it in her water dish which drives us crazy because she will bring us the wet toy.  We think she does that to keep her sister Kirstie from playing with it. It doesn't work.

Anyway, back to FIP not only is it fatal but it is contagious so Kirstie has also been exposed. FIP  apparently is very hard to diagnosed apparently they already been infected when we got them from the shelter.  We know the shelter did nothing wrong because it not always apparent that something is wrong. They had no idea anything was wrong. Dodie seemed to get sick really fast.  They were both didnt have any signs of FIP when we adopted them in January. FIP  can be in the cat's  body for years before the symptoms  appear. We have no idea if Kirstie is going to get sick. Currently Kirstie is not showing any signs of the disease for that we are grateful.
We are sad for ourselves when Dodie passes away but we are sad for Kirstie because they are sisters.
I apologize this post is sort of rambling but I have so much on my mind. We hope the medicine will give Dodie more than a few weeks. I think she is trying to fight this thing. She sleeps alot but cats do that.
She and Kirstie even get into trouble together giving us the "I didnt do anything" look. 😇
I guess that's all I have to say. I'm sorry this post is so sad. I just really needed to get my feelings out about this.
My poor daughters they are trying to be hopeful. Shannon who is 20 and is Dodie's human "Mommy" has been feeding her and giving  medicine.  Kaitlyn who is 16 is Kirstie human mommy has been helping with Dodie too but also making sure Kirstie isnt feeling left out.

I will have to contact the cat shelter to let them know what is going on so that they are aware that any kittens that were there when our kitties were have been exposed to FIP. I'm  not looking forward to that. 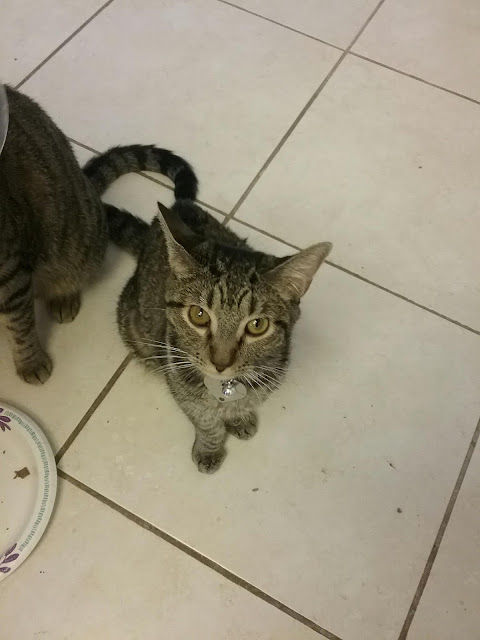 Some Slight Changes in My Blog

Hello ladies! I've been wanting to make on or two changes in my blog just to make it less boring look when it comes to posting.
One of the things I've always wanted to do is add a picture related to my post. I didn't know there are websites that have stock photos you can put on blogs until recently. The picture on my last post came from Pixaby.com
If any of you know other sites let me know in tne comments.
Which brings me to my next change is, I'm going to to my bezt to reply to comments starting with my last post on children and hot cars. I've gotten into the habit of approving comments but I haven't replied back so that's what I need and want to do.
I might not reply right away but I reply before I write a post.
Take care my friends!