- January 23, 2018
I wonder what would happen if men had a march similar to the recent women's marches demanding their right not to be exposed to half dressed women in the workplace, in church, on the street, on magazine covers, etc? What if they marched demanding their right to be treated like men and not a child by their wives and girlfriends? To be allowed to be a dad instead of their child being killed in the womb? To not be portrayed on television and movies as idiots?

Satan has been telling lies to women ever since The Garden:

" I can wear this see through dress! It's my body!"

"We don't  need to submit to our husbands"

Actually instead of marching for our " rights" we need to point people to Jesus. Jesus didn't march against the Pharisees. He pointed people to the kingdom of God. He died for both men and women to save us from eternal punishment.

Spam comments automatically go to my spam folder and wont get read or published. Sorry!

Popular posts from this blog

Being Our Husband's Cheerleader

- May 16, 2019
I'm so sorry it's taken me so long to get this post written.  I really wanted to seek the Lord on this topic.
First of all I'm no expert on the topic of marriage. I'm not a perfect wife and my  husband is not perfect.  But because God chose Tim to be my husband and me to be his helpmeet ( Yes I unashamedly used an "outdated" word) God's match is perfect.
I've been thinking about this topic for awhile now. I remember reading a blog post last year where a Christian woman in her wedding vows said she would be her husband's biggest cheerleader. Oh my goodness!  The way the women reacted you'd think she said  "Do what you want, even if it's sin! Rah!Rah!"😮
Comments raged from  "I don't need to cheer my husband"`to " Why should I approve of every single thing he does?" Sigh. They just don't get it.
First of being a cheerleader or encouragement  to our husbands is NOT: Giving approval to sin or other unhealt…
Read more

My Heart is Broken

- February 26, 2020
My heart is simply breaking for the family of Sasha Krause.  If you are unaware of who Sasha was, she's a young 27 year old Mennonite woman who went missing on January 18th from Farmington, New Mexico and her body was found a few days ago here in Arizona.  She had been murdered.
So many us outside and within the Mennonite community had been praying for her safe return. I really want to be angry with the person or persons responsible but, it's their eternal soul that's at risk now. So my prayers will be first for Sasha's family as they prepare for her funeral. I will also pray for whoever did this and that the person will confess to the police. And finally I'm going to pray for the person's soul( or I should say, the willingness to pray) that they will come to know Jesus. I believe this is something Mennonites are known for and I'm guessing Sasha's family and friends have already forgiven the person responsible. Only God can help do that.
So please pray…
Read more

Twenty-six Year's and a P.S. 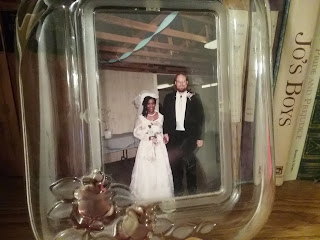 Twenty-six years ago I said  "I do" to this sweet, long hair BMW motorcycle riding guy. What cuties were back then!

Here we are today. I  think we are still cute!
So the P.S. I'm working on the post on rest and I should have it up by tomorrow.